Much has been written and said on this, and what I have to say is by no means authoritative, but I thought I’d write a quick summary of the various info I’ve found while reading:

1) Soft vs. Hard Clipping
The number one reason why tube amps seem to be perceived louder in volume for the same wattage seems to be soft vs. hard clipping. When companies rate amps for power that rate the wattage where the total harmonic distortion (THD) of the power section is below a certain threshold. This is generally not for the amp as a whole, but the specification of the power tubes or transistors in the current configuration and supply voltages.

Now the difference between tubes and solid state is that after that threshold tubes have soft clipping and solid state has hard clipping. As illustrated in the figures below, tube amps will still get louder above their rated power, while having less noticeable, and even desirable distortion and compression. Solid state in contrast will hard clip and sound nasty, and not be any louder. 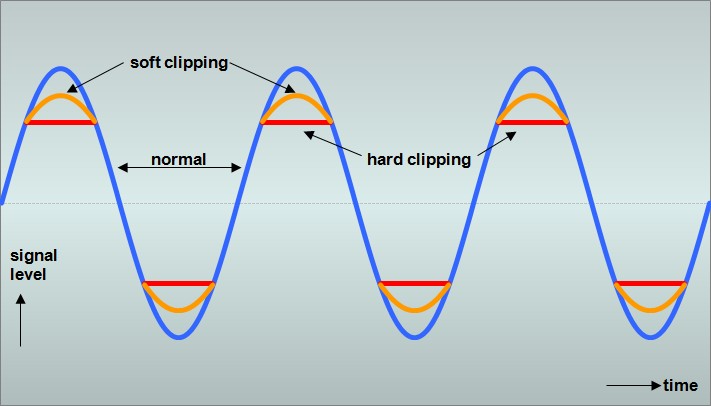 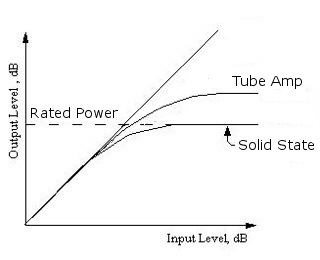 Now it is true that you can achieve soft clipping with various solid state components, but that will be limiting the total volume of the system, not pushing it above the rated specification for the power amplifier transistors.

2) Tube Amp Variations
Adding to the confusion there also seem to be variation in how loud two tube amps with the same power tubes or power rating can be. This can be down to a large number of factors, power tube supply voltage, transformer efficiency, speaker sensitivity, or technologies like Mesa/Boogie’s Dyna-Watt. Phillip McKnight has an excellent video showing different perceived volumes from similar wattage amps, and even how a higher rated solid state amp doesn’t sound as loud.

3) Logarithmic Volume Controls
A third possible reason for differences his how the volume controls are configured. Some solid state amps may tend to have linear volume controls, meaning the volume increases evenly over the entire sweep of the volume pot. Some tube amps may tend to have logarithmic volume controls, meaning the volume increases more at the beginning of a potentiometer’s sweep. This means a tube amp on 2/10 or 3/10 may be really loud, and still feel like it has a lot more volume to give, when in practice you may almost be at half volume. Of course if it goes to 11 it must be even louder!