2 Channel Guitar Amp In A Pedal

I’ve been experimenting with some of the cheap class d amplifier boards available on eBay from china. This is the PAM8610 board with a Wampler Euphoria clone as a preamp. I added a footswitch that footswitches between clean and overdrive. It switches between two separate gain pots for clean and overdrive, removes the clipping diodes for clean, and adds a lead master in overdrive mode. I did some tests with this setup in separate enclosures, and there was very little hum, but as you can see from the video, there is tons when in the same enclosure. Maybe I have something poorly soldered, or maybe things are just too close together. Still it would be cool if a real manufacturer did something like this and sorted out all the issues because it doesn’t sound bad other than the hum. I might get another one of the boards and put it by itself in it’s own box. I’m powering it with a Mooer 2000mA power supply, but a one spot or anything over 1000mA should work, and it should take anything up to 12V.

Here’s some pics of the project. Notice I had to cut some of the plastic housing from the input jack, as well as bend the legs to make it all fit. The chassis is grounded, but the speaker output is isolated from the chassis. I kind of wish I’d used the deeper 1590BS instead of a 1590B so that there was a little more room. 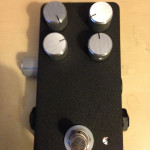 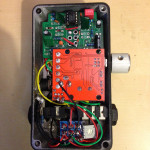 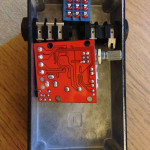 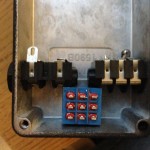 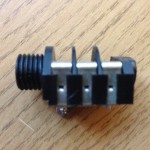 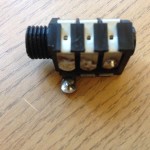